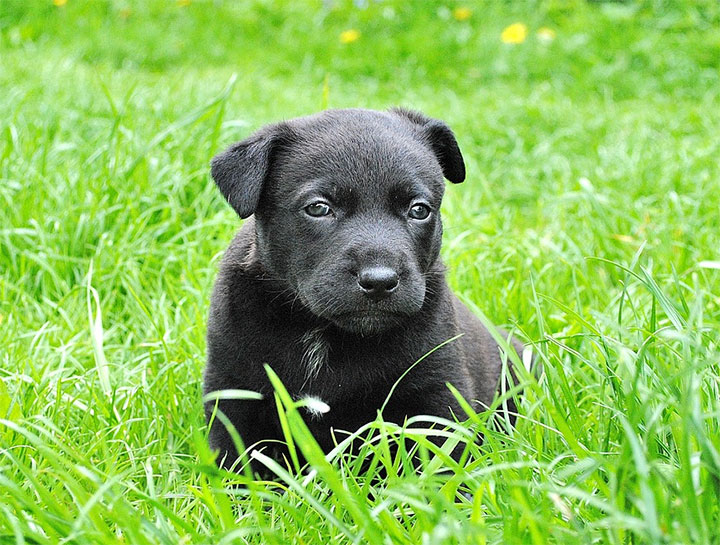 Dogs are a den animal. They have in nature a home which they inherently want to keep clean. As soon as the young pup is able to learn, his mother teaches him to "void" outside the den.

We can imitate nature by providing your dog his own den. In this case a wire crate. Why wire? Three reasons, first your pup can see you and visa versa which is comforting to you both you and your pup. Second there is unlimited air circulation and finally the crate can easily be dismantled and stored in a small area. Pick a crate that will accommodate your pet when full grown. This will provide you service for a long time. When your pup is small section off an area that will be adequate for current needs. Remember our idea is for the pup to keep his den clean. By keeping his room small he will be unable to find a corner in which to void.

Your young pup is coming to you with an open mind. It is up to you with consistency, repetition, praise, patience and kindness to help him develop into a dog of which you can be proud. Common sense dictates that you take your pup outside after he eats and drinks. Heap praise on him when he does his job since he sincerely wants to please you.

Restrict the pup to his cage at bedtime or when you are away from home for several hours. As long as he is old enough and has control, he will hold "it" until given the opportunity to relieve himself outside. Remember be fair he is only a baby.

Furnish the crate simply. Use a rug, mat, or towel to provide him with a comfortable area. Make sure the entire floor area is covered. This will convey the idea that no area should be used as a washroom.

The crate is his home. Favorite toys should always be returned to the crate when play time is over. The crate will serve as his home for bedtime. He will feel comfortable and secure in it. The crate will be an asset when traveling or when friends or relatives visit and you do not want your pup in the way.

A crate is helpful investment that will be worth its weight in gold. Use the following schedule to assist you in housebreaking your new pup.

If you maintain this routine for at least two weeks the pattern should be set. You can not start to check on his learning by allowing a little more freedom from his crate. Incidentally when the puppy is out of the crate, the door is always left open so he may go to his room when he wants to.

After a few more weeks, if your pup is good then confine him to his crate only at night and when you leave the house. Then test him whenever you please. Once you are confident of his progress start limited introduction to other rooms, but only when you are with your puppy and when your attention can be on him. It is important during these periods of freedom that you be sensitive to any whining or attempts to go to the door. Immediately, if not sooner, take him outside or put him in the exercise pen.

If by some chance your puppy has an "accident", determine what to differently to prevent the next one. Your puppy will no understand a correction for something he has done even a minute before; he only associates with the present. Clean the accident immediately and be sure to use an odor neutralizer, available at this office. This will help to prevent your pup from being attracted back to this area.

Here is a good website for more tips on housetraining your puppy:
humanesociety.org/animals/dogs/tips/housetraining_puppies.html